The experimental rocket Wireware 1 has crash-landed on the surface of a hostile satellite. The eight spacemen survived, but seven were captured. The eighth spaceman, after setting the emergency teleport unit up, must rescue his partners before the time of the teleport battery and the energy of their own spacesuits run out.

The player takes the role of the eighth spaceman and his goal is to find the seven hostages and bring them back safe and healthy to the teleport unit. He carries a jetpack that enables him to fly and a blaster pistol that lets him mow down the hordes of monsters that patrol the satellite. However, both the jetpack and the blaster pistol will overheat with ease, and if they reach a critical temperature they'll stop working for a while until they cool down to a normal temperature. The other spacemen are disarmed and their jetpacks are less powerful than the player's; thus the player must find them and make them follow him, and then he must escort and guide them back to the teleport unit. If the player moves too quickly, the hostages will fall behind, stop moving and wait for the player to come back. To make things more difficult, there are several electromagnetic barriers; the hostage spacemen are equipped with cards that can disable the barriers, but they'll only give them to the player when they reach the teleport.

Each destroyed enemy is worth 100 points and regenerates a fraction of energy of the spacesuit; lost energy is also slowly rebuilt as time goes on. Rescuing a hostage refills the energy of the player's spacesuit and also awards 10000 points in the case of the first hostage, 20000 points in the case of the second one, and so on until 70000 points for the seventh and last hostage. The score is shown on the information panel, together with the spacesuit's energy (the panel's top gauge), the rescued spacemen (more exactly the barrier cards they gave to the player), the temperatures of the jetpack and the blaster pistol, and the remaining time.

Joystick by default, can be redefined from the main menu. “P” starts a pause; pressing “P” again resumes the game. ESCAPE quits the current game and returns to the menu.

This game was made during ten desperate days, by recycling code and graphics from past projects (hence the peculiar “cameos” of the pumpkin from “Frogalot” and the green slime from “Hirehare”, for example) and even abandoned ones: “Wireware” was going to be my game for CPC Retrodev 2019, but it couldn't be. I also had to give up on multiple ideas during the development: for example the hostage spacemen were intended to land, walk and take off, but they finally limited themselves to flying because the rhythm of the game, already slow on its own because of the need to guide them patiently, grew even slower if they wanted to walk on land. The final result is cut down on lots of places: the fourth-layer scroll is useless with so few things on screen, no enemies need more than one shot to die, etc. At least the homage to “Rainbow Islands” stayed: the seven electromagnetic cards play the role of the rainbow diamonds. Other sources of inspiration were "Jetpac" (1983 Ultimate / A.C.G.), "Antiriad" (1986 Palace) and "Sol Negro" (1988 Opera Soft): thanks to them this game is here. 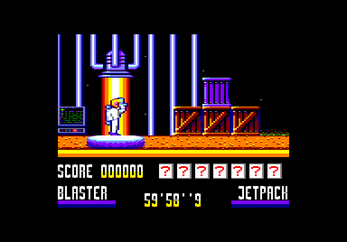 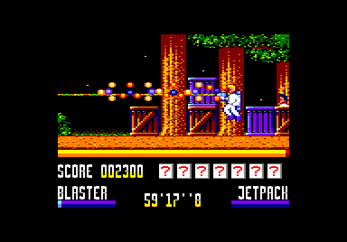 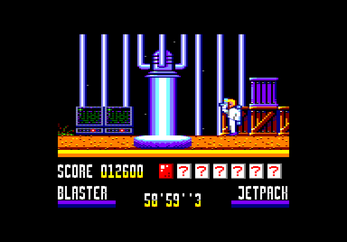 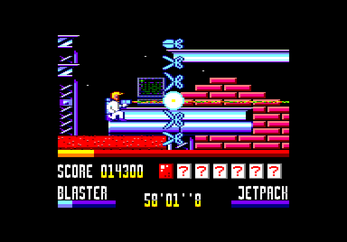