Hecatia is back! After defeating the feared Lycurgus in "Hire Hare", Hecatia has dared accepting the challenge of the dangerous wizards Glanosuchus and Alopecodon, who turned a mansion into their stronghold. Will Hecatia succeed in this dire dare?

The player takes the role of sorceress Hecatia, whose goal is to locate and defeat Glanosuchus and Alopecodon, hidden in opposite corners of the mansion. They're initially unreachable because the mansion is filled to the brim with locked doors: this requires finding four colour keys (that will help with most of the doors) and the three magic wands (that will take care of the remaining doors and are the only devices that can counter the powers of Glanosuchus and Alopecodon), all while miscellaneous kinds of hostile ectoplasms become material around Hecatia and drain her energy (that she can refill with the help of food scattered at random around the mansion) and the unlocked doors open and close themselves at random for the sake of slowing the heroine's steps down.

At the beginning, Hecatia is limited to walking slowly and shooting spells that vanish a single enemy ectoplasm. The magic wands will give her new abilities: running quickly, stopping the spontaneous motion of random doors, and blasting more than one ectoplasm with a single spell. Blasting an enemy is worth 50 points; collecting a food item, 10 points; the seven special objects (the four keys and the three magic wands) are worth 1000 points each, as well as defeating each enemy wizard and completing the game. The score is shown in the bottom left corner of the screen, below the achievement indicator (a digit that adds the numbers of collected magic wands and defeated wizards, and four squares with the colours of the keys found so far) and to the left of the gameplay elapsed time counter (in minutes and seconds) and the hit points, that start as 99; the game ends when the hit points drop to zero.

Joystick by default, can be redefined from the main menu. "P" starts a pause; pressing fire toggles the control style (classic or diagonal) and touching "P" again resumes the game. ESCAPE quits the current game and returns to the menu.

I had ambitious plans for this second part of "Hire Hare", my game for CPC Retrodev 2016: taking the legendary "Atic Atac" (1983 Ultimate), mixing it together with other titles from the same house ("Pentagram", "Night Shade", "Knight Lore"...) following the steps of the beautiful "Melkhior's Mansion" (2021 Bitglint Games), improvising here, there and everywhere... but the raw reality didn't want it so. I had to get everything done in under three weeks, reusing code and graphics from past games, although at least it made sense now because it's a sequel. To add insult to injury I also ran out of memory while I worked (a thing that has happened to me more times!), so I found myself having to erase graphics (there were originally more than one portrait, several furnitures, more enemies...), reduce the map to two bytes per room plus two bytes per door, and trimming the gameplay to extremes that are better not spoken of. But at least I could finish the game in time for the competition, and here it is.

Nice game! More information about our German-language review can be found here (switch on automatic subtitles, if necessary). Subscription to our YouTube or Twitch channel is welcome!

This is absolutely stunning! 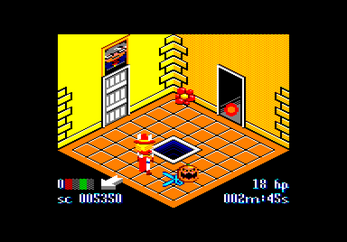 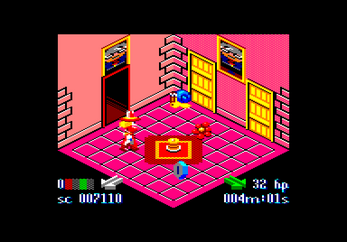 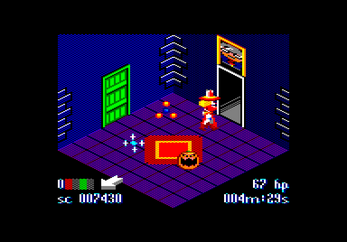 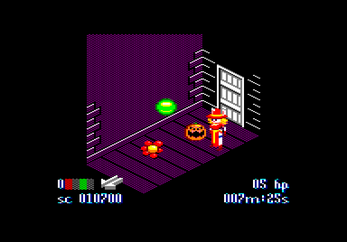